The fourth edition of Let It Beat! will opened by TJADE.
Someone mentioned I would like his style of playing. When I finally and accidentally heard a set of him at Subsonic, I was convinced: he needs to play a set in VERA! This man performed at KopjeK's Liccen in het Bos which was held in Stadspark, Huize Maas and several times in Pand48. If you like house music influenced by UK Garage and the nineties (like me) you should definitely come to see him!

After that Jay-P will be handling the buttons. He already performed at very big parties and festivals like Eurosonic, Noisia Invites & Bevrijdingspop. This new label manager of Vision, Division & Invisible Recordings (record labels of Noisia) has supported acts like Faithless, Tiga, The Bloody Beetroots, Skream, Pendulum, James Blake, Don Diablo, T. Raumschmiere and lots more! What you can expect is a mix between discopunk, hooligan house, hip-hop, rock, dubstep, drum 'n bass and also an arsenal of own edits and mash-ups.

Me and my partner in crime from Druktemakers (Subsonic, Simplon) will finish this night with a fitting drum 'n' bass set. Come see! 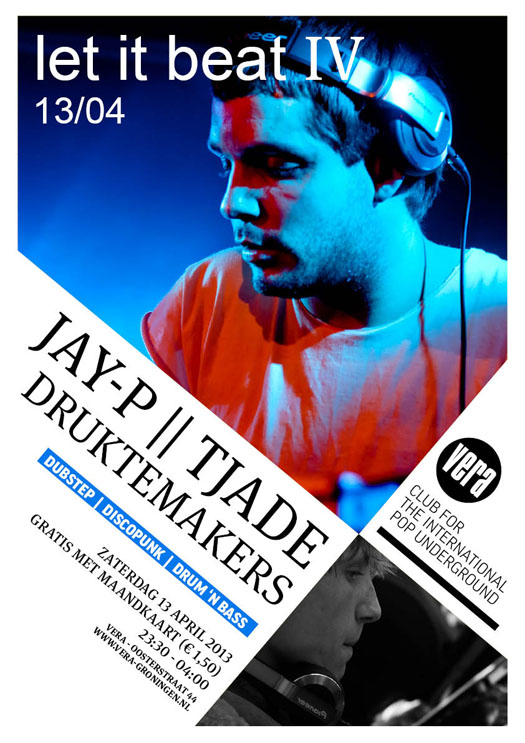